First half of the course (around 21 miles)

Given the magnitude of my upcoming race I took advantage of the first of two pre-runs of the Mountain Masochist course (a 50 mile course that's really 54 miles long.) The 9 October gathering was to run the first half of the course (minus the initial 6-7 miles which are on blacktop roads.)

At 6:30am a group of about 14 folks (of the 300 signed up for the race) met at Long Mountain Wayside where the Appalachian Trail crosses Route 60. There's a nice area to park and some picnic tables. It's also the half-way point of Mountain Masochist. We gathered in a few cars and drove the 20 minutes down do the start point.

The folks I traveled with offered a broad spectrum of experience. The car owners were a husband/wife who had just completed Ironman Wisconsin and had driven down from DC that morning; only the husband was running today. He's just getting interested in ultras and this would be his first attempt. Two other folks has both DNFed (Did Not Finish) Mountain Masochist last year for various reasons: illness and missing the cutoffs. I told them they were not instilling me with confidence.

After a brief description of they key turns on the trail by race director Clark Zealand (which we all promptly forgot -- there are a lot of turns and they all sound the same "turn right at the better gravel road".) Clark also directs the Terrapin Mountain 50K and Grindstone 100 (which occured the previous weekend.) Dr. Horton (he directed this race for its first 20 or so years. He still directs Holiday Lake 50K, Promise Land 50K and Hellgate 100K) was there as well and he and a few folks were on mountain bikes and would blaze through on some alternate route and put some peak streamers at key turns on the trail. 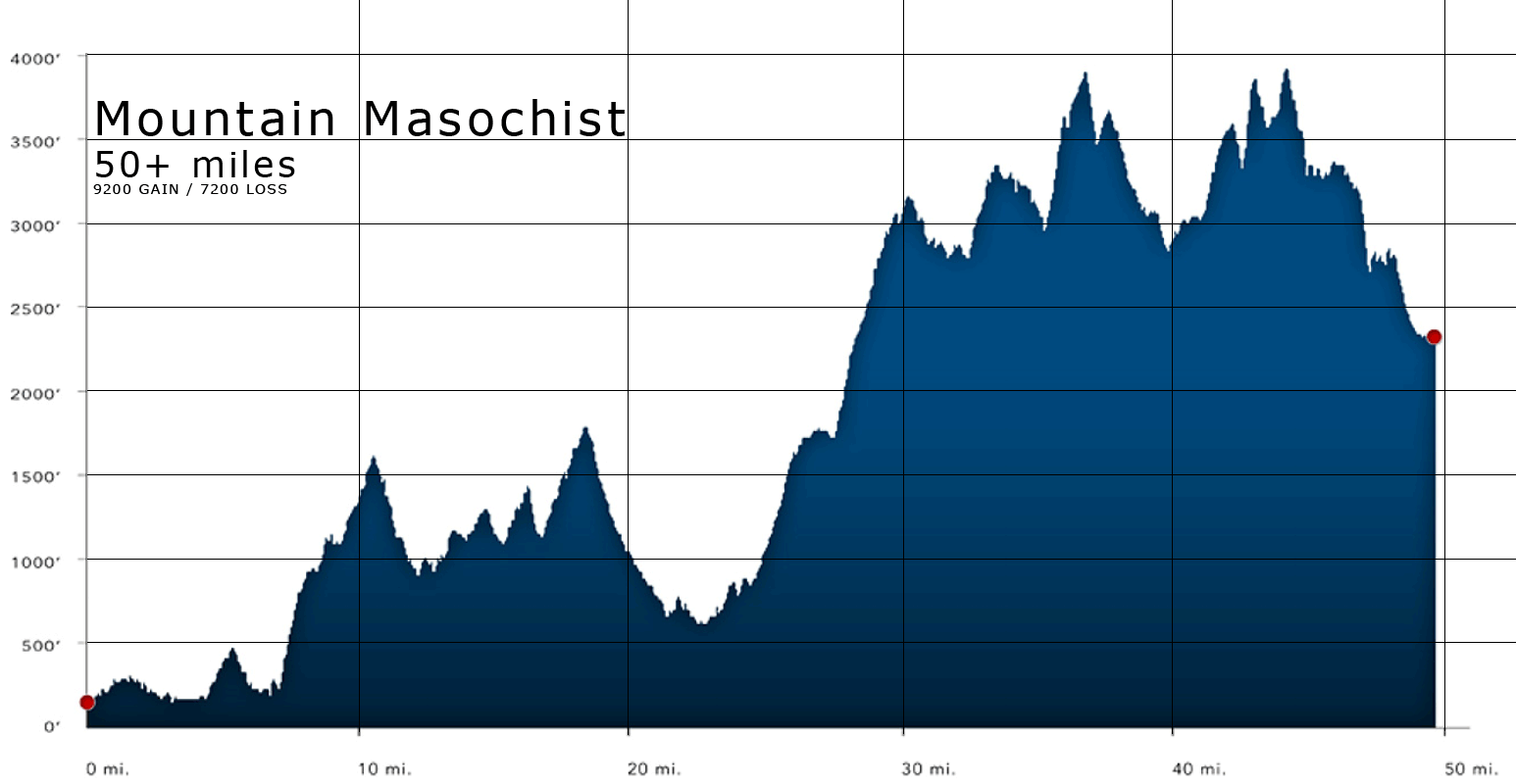 We ran from about mile 6 to mile 27. The day's finish is at the end of the "bump" in the long climb in the middle of the chart.

As we ran off at around 7:15am a group of guys (most of the guys!) tore off up the single track. I never saw them again. The trail quickly turned uphill and I slowed to a walk already. Fortunately the fellow in front me was walking too. He had been introduced as "Muffy" and he's run the race at least 4 times, though none in the last 5 years. He lives locally and runs the trails often. His pace matched mine quite well and we chatted, ran and walked for nearly two hours. As we passed the through the tunnel under the Blue Ridge Parkway he turned to run back. It was about the half way point for the day but he had other business in town and heading further north wouldn't help his schedule.

Blurry running photo. I pointed the camera backward over my shoulder. I kind of like the radial bur.

This tunnel takes us under the Blue Ridge Parkway.

A pair of women were behind us and we frequently heard their voices. They caught up with me on a long, steep climb and the sharing of background and experience began again. We stayed in contact with each other for the remaining 2.5 hours more or less. One of them knew the course as well and it was nice to have confirmation. I might have missed one turn if it hadn't been for the experienced runner.

Most of the run is on forest service road. This one was nice hard pack with only a few rocks.

The long climb felt pretty steep to me and I had to really work to keep pace with the women. One walked very quickly at a constant pace. The other walked much slower, but then would jog past us and walk again. My lower back was getting tight and achy. I tried to stay up right and not lean forward but it didn't seem to help.

At the top of the climb we turned and ran downhill. It started out pretty steep and gradually flattened out some. Most of the run is on forest service roads of varying degrees of roughness. Early on it's quite rough. This steep up and down was on very nice (for cars) gravel road. The gravel was killing my feet on the downhill though. I'm not sure if I needed to run faster or slower, tighten or loosen my shoes, or do something else. I wore my gaiters and they worked quite well. I didn't have as much as a grain of dirt/sand in my shoes or socks.

We entered a nice rolling section by a resevoir. It was a bit disappointing to not be able to really see the resevoir or any other mountain views though. The trees are too thick along the trail to see much through them. In some cases I was far too absorbed not tripping over things to look for scenic views.

North of the resevoir we get a nice section along the river. We'll cross a bridge over the river and head back on the other side, climbing up and away.

The gravel road looks very nice but it was killing my feet.

From the bridge over the river. It was quite clear. I imagine fishing it would be fun.

Finally we approached the last long uphill phase. I felt it in my back the whole way. I knew it was coming and it felt about as long as I expected. It flattens out near the top. It'd be a relatively easy mile or two to run if my feet weren't aching. Finally after 21 miles we arrived at Long Mountain Wayside. We'll be begin there on 23 Oct to run the back half of the course. It begins with the another 3-ish climb with some fairly steep slopes.

The flatish area as we near Long Mountain Wayside offers a few views over fields. There were a few houses along this road as well.

The pre-run was unsupported so I wore my hydration vest and drank every drop of the 2 liters of water I had in it. I ran out of water with about a mile to go, so that worked out pretty well. I ended up snacking on gummi-bears throughout and went through a few hundred calories worth. I never felt fatigued or hungry.

Overall I spent about 4.5 hours on the course. That includes stopping for some photos and bathroom stops. That pace is fast enough to get me through the course without hitting the cutoffs, but barely. I need to figure out a way to stop the blisters on the gravelly downhills and figure out how to not wear my back out walking uphills. Oh, and getting uphill faster would sure help!